Day 6 at the hospital was quite the roller coaster.
I apologize in advance if some of this doesn't make sense... Exhaustion is setting in and I'm typing all this on my phone. (Regular 5am wake ups are not my jam)
Branch's doctor made rounds super early this morning (we're talking pre-7am) and we received the bad news that his count was down to 1,000. Branch was also having a slight bloody nose which had the doctor concerned.
His initial decision was to make movements towards a splenectomy. Removing the spleen has a 90% chance of success at curing the ITP. The doctor told us we'd be having a consultation with the surgeon later in the day.
We were both pretty upset but we know we can handle just about anything at this point.
Closer to 11 we got a call from the doctor. He had changed his mind and decided to try a new steroid and a new medicine to promote platelet creation (instead of a medicine to coat and protect the existing platelets). He also decided to give Branch two more transfusions of blood type specific platelets.
The highlight of our day was getting to see Easton. He has been snowed in at my mom's since Sunday and we have missed him so freaking much! 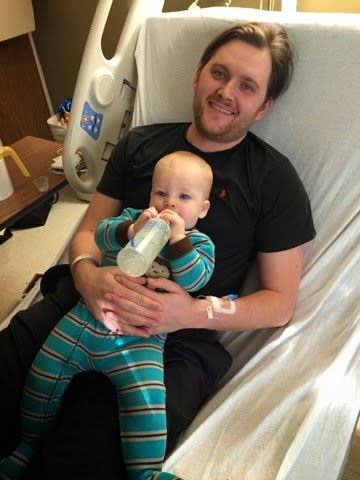 It definitely lifted Branch's spirits to see him :)
Another highlight was the arrival of my Stepmom from Florida! We are so blessed to have such a strong support system to help us through this challenging time.
The next blood draw is scheduled for  early tomorrow morning. I'll make sure to update.
Good night y'all!