We had our first doctor's appointment this morning at 8:15 and Easton did really well! He did cry the most he's ever cried (combined) since he's been born but it was still less than the screaming we heard at least compared to the other screaming babies in the doctor's office ;)

First up was the weigh-in. Babies typically lose 7% of their weight in the first week and then start gaining it back. Easton weighed 8lbs, 7.3oz when he was born. When he was discharged on Saturday, he had dropped down to 8lbs, 4oz.  Today he weighed in at a little over 8lbs, 1oz meaning he's only lost 4% of his body weight - we're doing good! We'll be going back in on Friday for another weigh-in. 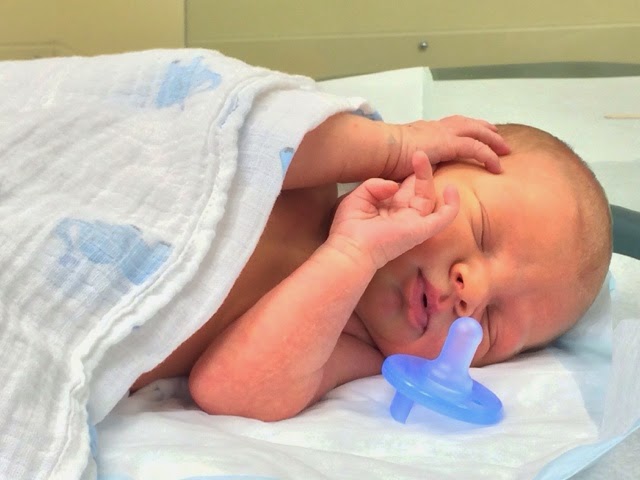 The doctor looked him over really well and said he was a strong baby. We also ran another test on his jaundice level. It creeped up 1/2 a point but doctor isn't worried about it at all so that's good news!

Otherwise, we're all doing great! I'm so thankful that Easton has been easy on us these first couple of days at home. He was still a night owl on his second night, staying awake from 11:30pm - 2:30 am, but we're making every effort to go to bed early and take naps to compensate. My mom is planning on coming down to help out for a few days starting tomorrow and then Branch's parents will be here this weekend. I know they are all super excited to meet him and we're looking forward to having a few extra sets of hands :)