Our last excursion day was spent on the Grand Cayman island. I was most looking forward to this day, but not sure if we’d be able to top our day in Roatan!  The port in the Caymans was different than all the other ports since we had to take a "Tinder" to shore. They were basically little water taxis that made the quick 5 minute boat ride to and from shore. 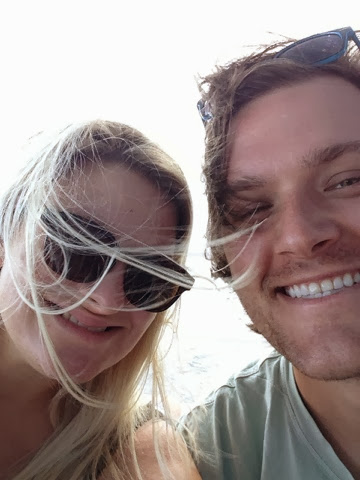 Excited about the day! 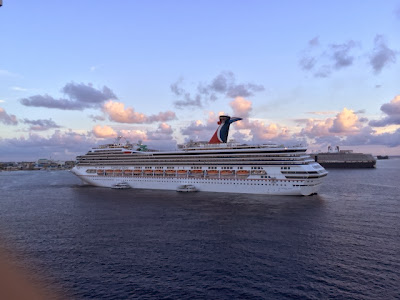 We weren't the only ship visiting that day!

We started out in George Town, the main city in Grand Cayman. 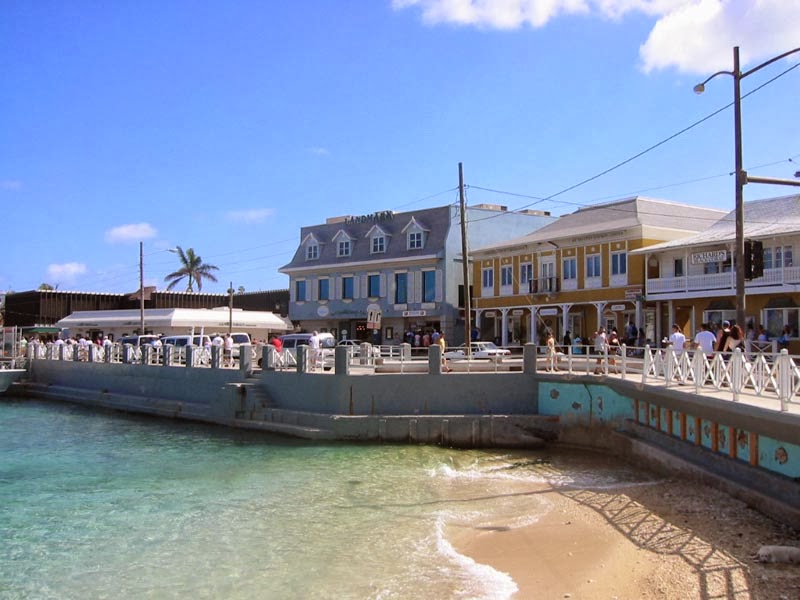 We popped in and out of shops and talked to some locals about where we should go.  Everyone recommended a beach club called Royal Palms on 7 Mile Beach.  We took a cab to Royal Palms and had a really nice lunch but Branch could tell I was hesitant to spend the afternoon there. 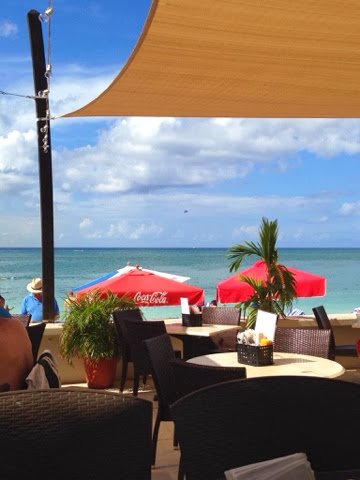 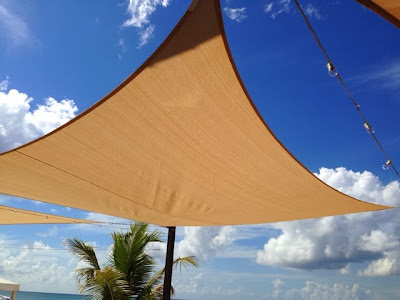 I was in search of a nice pool to spend the day at.  I love looking at the ocean, but I much prefer to spend my time at a nice pool as opposed to getting all sandy and sticky at the beach.  This portion of 7 Mile Beach happened to be particularly crowded – apparently we weren’t the only people who had heard about this particular beach club!  We set off down the beach to see what else we could find. After walking about a mile on the white sandy beach alongside crystal turquoise water, we came across the Ritz Carlton Grand Cayman.  I had heard from a coworker that this was a nice place to spend the day, so we walked in off the beach to see if we could rent some chairs for the day and use their facilities (this is pretty common thing to do among resorts in the area).  Well apparently, we gave the impression that we belonged there, because not long after arriving, we were offered two beach chairs by the pool by a steward named Roberto.  He just asked if we could wait a moment so he could get us fresh lounge chair pads and new towels – we just exchanged disbelieving glances at each other and said  “Sure!”.  We spent the afternoon chatting with hotel guests (we met more people from Atlanta), taking in the view and enjoying complimentary chilled pineapple wedges – no one ever questioned our presence there! It wasn’t until we got home and looked it up that we discovered that rooms there go for $500 - $1,700 a night!  What luck we had! 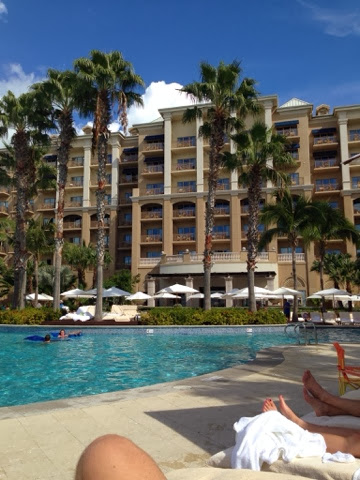 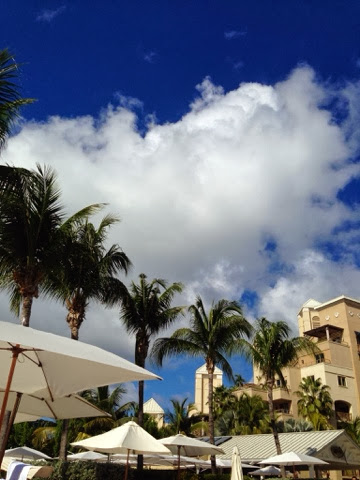 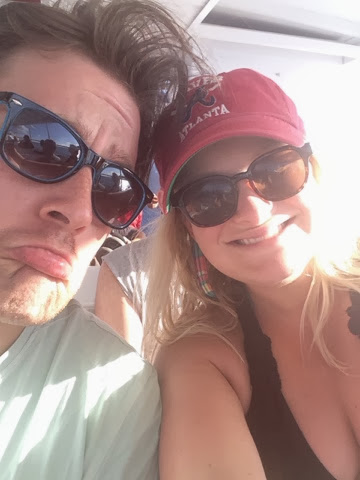 Branch was sad our last excursion day was over! 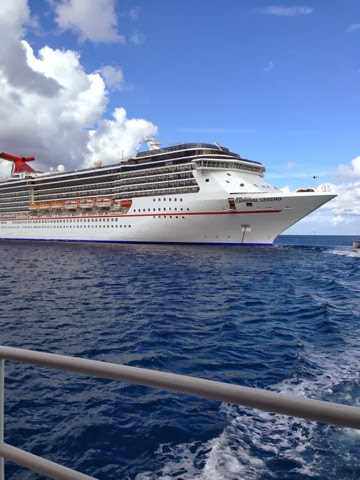 Pulling back up to the beautiful Carnival Legend

That night, we were treated to a magic show on the boat by Justin Illusion (full disclosure: it took me a solid 3 days to get the pun in his name!). I’m such a sucker for illusions and magic tricks – I don’t even want to know the secrets behind them, I just want to be entertained and this guy was great! Easton especially loved the show (or could tell how much fun I was having) and threw some of his biggest kicks yet! 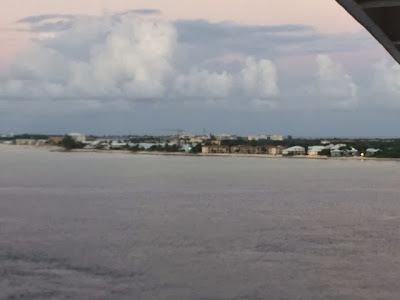 Sailing away from the Caymans 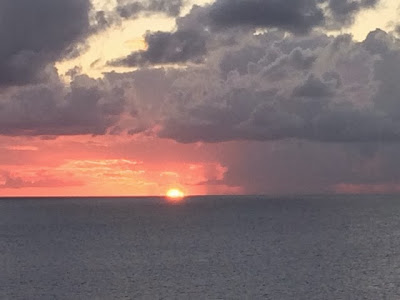 The last sunset we were able to watch from our balcony...


The next day was our final day at sea.  We scored an awesome lounge on the “adults only” Serenity deck and spent the morning working on our tans and finishing up our books.  Days at sea are typically packed with activities and this day was no exception! 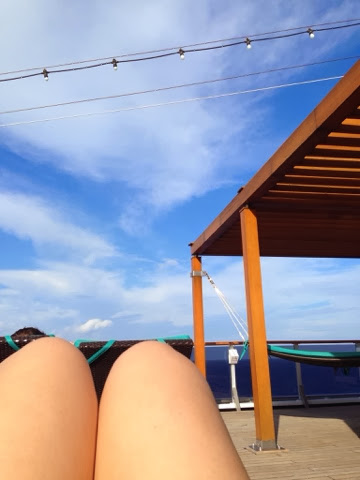 In addition to laying out and taking a 2 hour nap, we went to a live version of the “Newlywed Game”, played a round of Bingo, and took part in the Groove for St. Jude!  We also participated in a huge game of "Gender Wars" which was a cross between trivia and challenge activities. 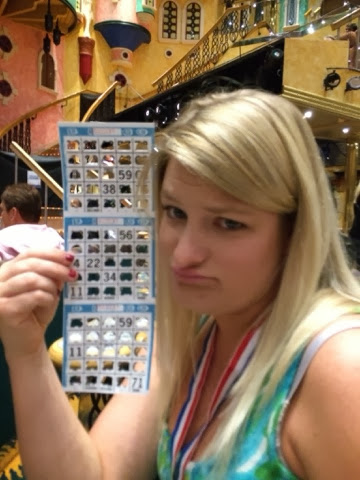 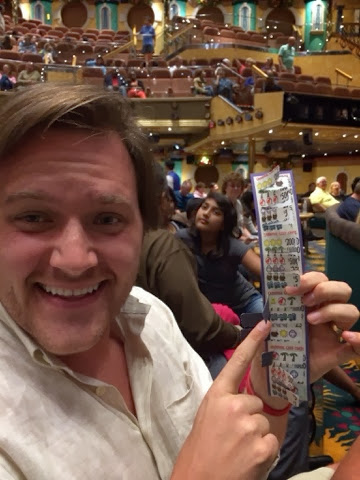 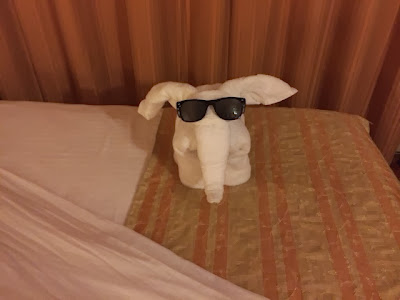 My favorite towel animal of the trip!

The show on the last night of the cruise is always a compilation of talented ship guests! They sang and danced as various “legends” – Aretha Franklin, Madonna, Britney Spears, Elton John, Dolly Parton, Sunny and Cher and even Elvis!  It was so fun to hoot and cheer for our fellow guests – they really were very good! 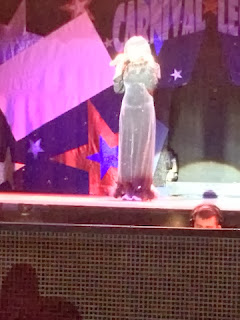 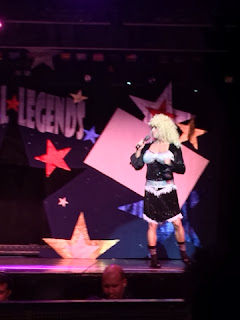 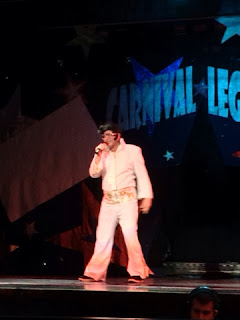 The King is in the building!

The next morning we arrived in Tampa.  It was so gloomy! So hard coming back to reality! 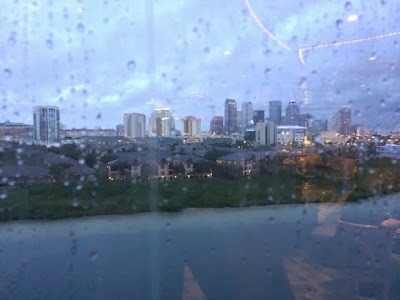 Even though we had mixed emotions about coming back home (we never wanted it to end, but we were sure getting tired!), it was an incredible vacation and the perfect Babymoon.  Our lives our going to be drastically different in a few months, so it was really nice to take a week and just focus on each other and make some great memories.  We both came back tan and happy (and more than a few pounds heavier!!)
Labels: Babymoon