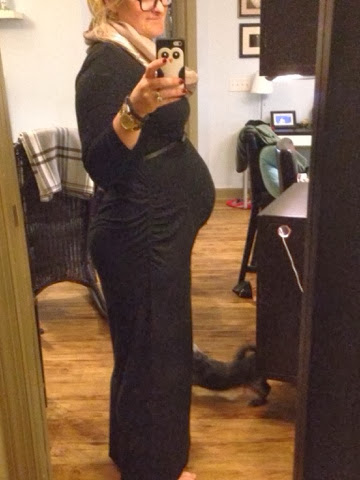 How far along? 29 weeks 5 days
Maternity clothes? Basically completely maternity - ordered some new dresses, shirts and another pair of maternity jeans!
Stretch marks? No new ones, thank goodness!
Sleep: We're lucky enough to have a Sleep Number mattress. I found that if I crank my side down really low (like the equivalent to a waterbed level of support), I can get a pretty good night's sleep! That being said, I've been awake since 2:30AM last night.
Potty break + Active baby = No rest for the weary.
Best moment this week: Taking last Friday off! Branch and I hung out in bed and binged on TV shows all day long! We only got out of bed in the evening to move to the couch so we could watch movies! It was glorious!
Miss anything?  My body belonging to just me!
Movement: So much movement! I feel like he's really grown this week so now instead of indiscernible thumps, I can feel actual limbs moving along the inside of my stomach and up near my ribs. It's kind of cool, but more freaky than anything else. He's also moving much more frequently throughout the day (and night!). Google says this means he's likely to be an active newborn who doesn't like to nap. Oh boy.
Food cravings: Rice Krispies cereal!
Anything making you queasy or sick: I had a bit of a stomach bug the first half of this week but it seems to have passed, thank goodness!
Gender: BOY!
Labor signs: No.
Symptoms: Lower back pain and sore hips - little boy is really stretching out in there!
Belly button in or out? It's officially out and won't be going back until this baby is out!
Wedding rings on or off? Off but only because I was having my ring serviced this week ;)
Happy or moody most of the time: Moody :(
Looking forward to: Next Thursday's ultrasound appointment. We should be getting a 3D ultrasound which will look much more realistic than a normal ultrasound. I can't wait to get a better idea of what Easton's little face looks like! We'll make sure to post the pics next week.

And now please excuse me while I rant for a second about something that has really been bothering me this week. Apparently, for whatever reason, a lot of people use a woman's pregnancy as an excuse to make comments that would otherwise be considered socially unacceptable. I know that you nor I would ever make comments about a non-pregnant woman's figure to her face except to compliment her. You would probably never say "wow, your stomach looks huge in that dress," or "other women that come in here are so much smaller than you," so it is beyond me why you would ever say that to a pregnant woman. I'm sure that the surge of hormones running through my body makes right now me much more sensitive than I would normally be, but please people: think before you speak. If you wouldn't make that comment to a non-pregnant woman (or would never want hear someone say that comment to you) then do not say it to a pregnant woman.

I came into this pregnancy knowing my body was going to change. I worked really hard to stay positive as I gained weight, my clothing size went up and my body changed in unexpected ways. I came into this pregnancy wanting to embrace the changes, be happy with them and know that during this temporary period in my life, they were to be expected. But people's comments can hurt, even if they aren't intended to be malicious.  I don't want to hear that you think I look like my baby should be due sooner than April. I don't want to hear that other women you know that are due around the same time are so much smaller than me. I especially don't want to hear that you think my belly looks huge. All I care is that my baby is healthy, that he is growing right on track with where he should be and that I was blessed enough to become pregnant in the first place. You're entitled to your thoughts and opinions and you can judge or compare if that's your prerogative, just please keep it to yourself.

Alright, rant over! Only positive thoughts from now on! In other news, we finished our first "nursery project" this week! Can't wait to share!