Happy New Years Eve everyone! I hope you all had a fun and safe evening last night! I'm down with a cold so I didn't make it out last night, but Branch got to spend some time with friends before coming back to give me a kiss at midnight :) Today, he's spoiled me with birthday presents, taking me out to breakfast, treating me to a prenatal massage and now he's cooking me some of his mom's famous spaghetti! I feel like I'm the luckiest girl in the world :)

Now to continue on with our Babymoon! We woke up on Christmas Even in Cozumel, a small island off the coast of Mexico.  After a delicious brunch, we packed up our bags and made our way off the ship.  One aspect of cruising we aren’t a fan of are the excursions the cruise ship offered. First and foremost, they are incredibly expensive.  Second, I couldn’t do about 95% of them because I’m pregnant and considered a liability.  Fortunately, I’d been on a cruise a few years back with some friends and we always chose to do our own thing so I knew it was possible to have a good time without going through a ship organized excursion.   The last time I had been in Cozumel, we rented Vespa scooters to get around the island. Branch is a very protective father-to-be and was not about to let his six-month pregnant wife drive around on a scooter but after some persuading, I convinced him we should rent a car instead of taking a taxi to one particular destination.  Cozumel is only __km long and is basically one road that goes in a circle around the island so I knew we didn’t have much of a chance of getting lost.   We saw lines of shiny Jeep Wranglers for rent but unfortunately, neither one of us know how to drive a 5 speed.  The only automatic the rental company had to offer was a 1992 Geo Tracker.  This thing was a HOOPDY! The only glass it had was the windshield (the sunroof and windows in the doors had been permanently removed) and the seatbelts would pop open sporadically.  The guy told us to put $10 of gas in it because “the fuel gage doesn’t work too well”. Turns out, nothing in the dashboard worked at all! Oh well, we thought, “here goes nothing!” 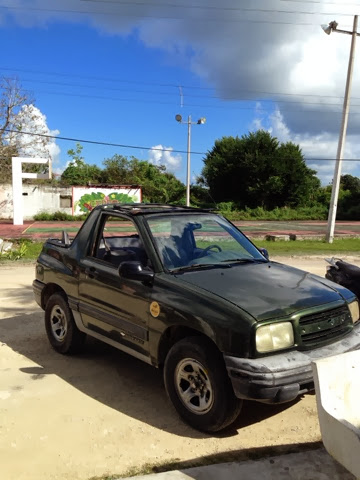 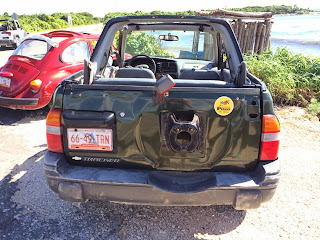 We headed off in our glorified golf cart and soon found ourselves on a sparsely populated road taking in the stunning views of the ocean.  This pregnant girl was getting hungry and needed to use the bathroom so we pulled over at the first beachfront restaurant we came across. 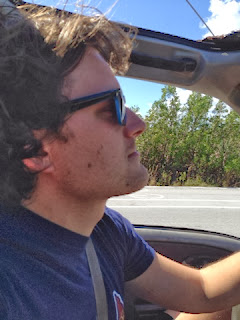 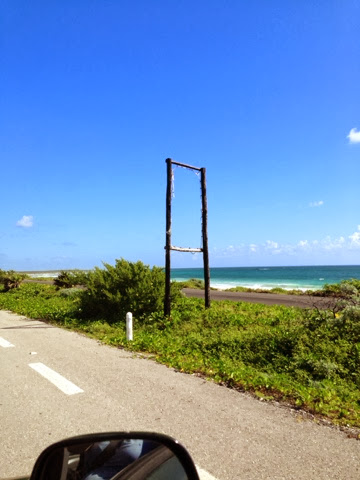 Can you believe this is how we spent our Christmas Eve? We were pinching ourselves! 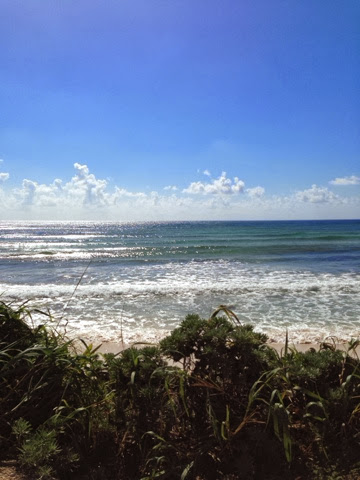 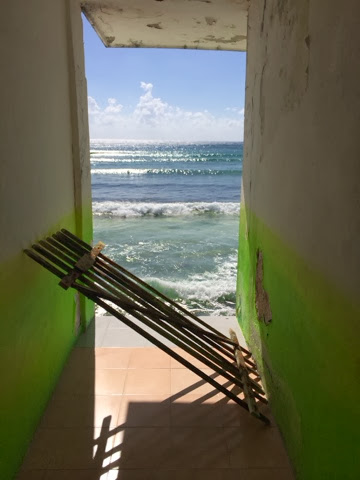 This view was just outside of the bathroom 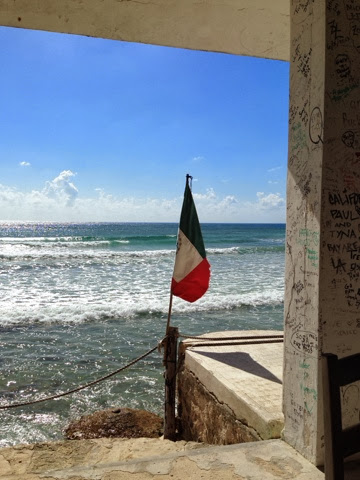 After a delicious meal, we headed in search of some Mayan Ruins.  We followed the map to the first ruin location and turned off the main road into something that looked just like the entrance to Jurassic Park! We were ready to be impressed! We pulled into the area of shops set up around the ruins to entice tourists to spend their dinero and started walking around.  In addition to the small vendor stands, there was a beautiful little chapel but we still couldn’t find the ruins! Finally, we spotted it behind the church…people have larger outdoor kitchens.  After taking a look at the unimpressive pile of stones, we decided to hop back in the golf cart in search of bigger and better ruins. 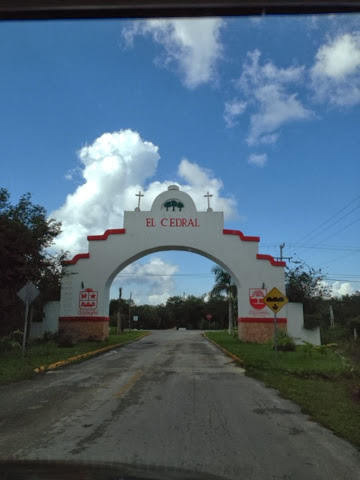 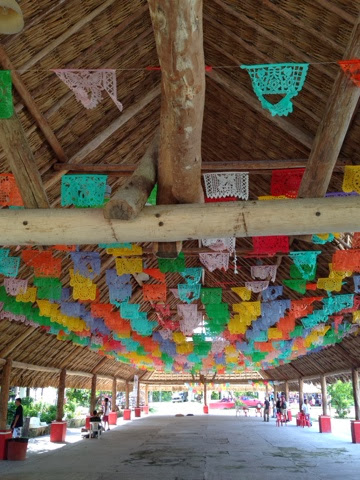 I love how colorful Mexico is! 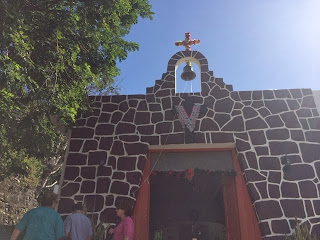 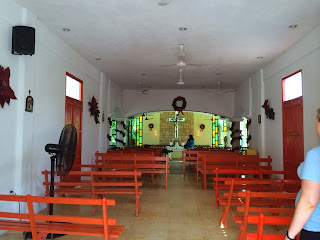 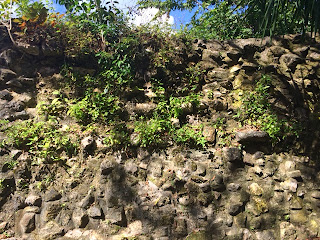 The second set of ruins promised to be bigger but was down a 6km road (~4 miles) that was marked with a never-ending series of pot-holes.  After an eternity of bouncing, we finally made it to the ruins. These were much more impressive!  It’s hard to believe that they’ve been around over 1000 years! 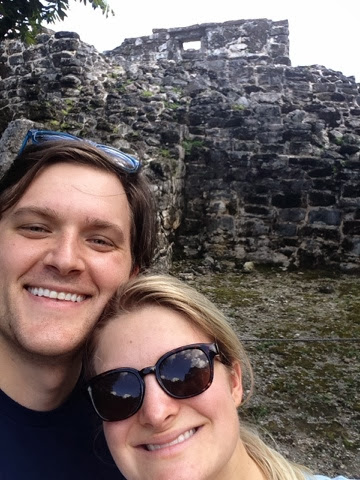 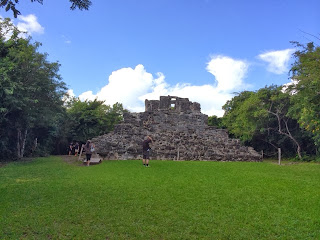 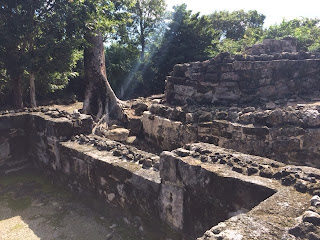 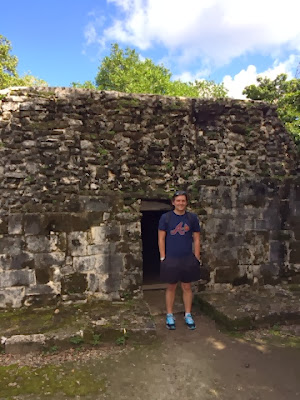 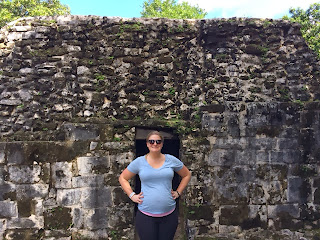 That night, we opted to eat at the steakhouse on board the ship to celebrate Christmas.  I have to say, all the food on the boat was delicious but the steak dinner was especially good! 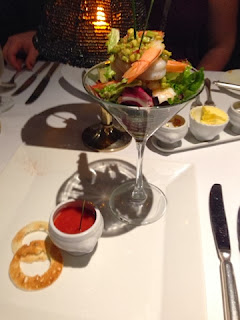 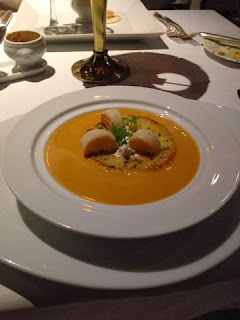 It was a perfect way to spend Christmas Eve! 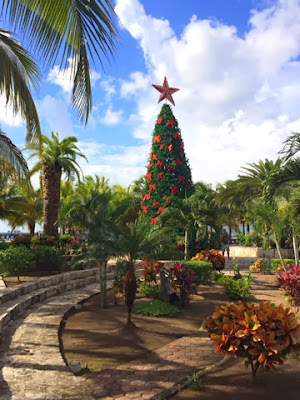