Homeless for the Holidays?

We Howard's are officially homeless. Ugh.

So here's what happened:

We moved to Nashville this summer into a house sight unseen that we found on Craigslist in our dream neighborhood and for the first couple of months, things were fine. Sure the house was a bit wonky and we had concerns about the structural soundness of it all, but hey, #YOLO

Everything was going fine until recently some changes went on in the upstairs unit and the one bedroom above us that was previously occupied by one guy in the music business (read: never home) suddenly become home to three adults on rotation (and occasionally all three at once!). The house was older and you could hear every. single. thing. I mean everything. Not to mention their entrance was up a set of metal stairs that was attached to the wall our headboard was on so we were consistently woken up by them stomping upstairs at 2am. I wasn't having it.

So we found a new apartment. It was in an amazing location - smack dab between Hillsboro Village and Music Row. Our friend lived in the same building and two more lived just a few blocks down. It was a corner unit in a mid-century condo building with big windows, an open floor plan, was on the top floor and didn't share any walls with neighbors. Oh, and it was at least $200 a month less in rent and utilities than what we were currently paying. Sign me up! Easton checking out the new digs!

Tuesday night, after the bear went to sleep, Branch and I spent a couple of hours loading up the moving truck which we continued to do the next morning. We pulled up to the apartment and got to take a good look at things for the first time (the previous tenants had been home when we had visited prior to moving in). The first thing we noticed were the 6-7 cracked window panes. No big deal, the landlord will surely fix those, right? (Spoiler alert: the response I received was "It's an old building with old windows"). 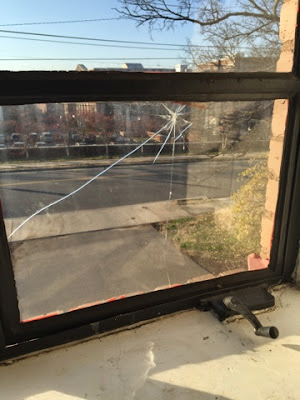 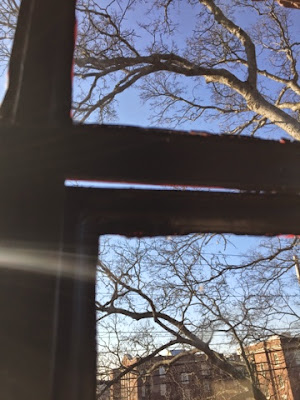 This particular window just didn't want to shut at all. This particular window is in Easton's room - In addition to the cracked window panes, all of his windows were covered in cling-on privacy glass film. The previous tenants told us it was removable, however upon further investigation, the stuff wasn't budging.

Next, after the movers had gotten our stuff two-thirds of the way in, we discovered that there wasn't a 220 volt outlet in the laundry closet, which means no dryer....we wouldn't have rented the place without a washer dryer hookup (which we had been told there was) but I figured we could make it work. There is a laundry room on the opposite side of the building and I could air dry the diapers on a drying rack.

With two loads left to be unloaded I started to smell it. And then the whole apartment started to smell like it. Looks like we've got Cheech and Chong living below us*. It smelled so strongly that the movers thought I had lit up a bowl in the kitchen and were talking about it at the truck! It was the last straw. This just wasn't going to work. 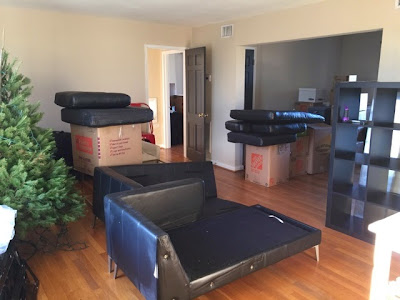 And this is how we left it Wednesday night.

So we called the landlord. At first the landlord wasn't budging but my lawyer husband eventually changed his mind (I'm so proud of him!) and now we're out of our lease, which is great, but it also means that we're out of a home, which isn't. Fortunately, we have two awesome sets of parents that live in Nashville (and a third awesome set coming to visit next week!!!) so we have a place to stay until we get things figured out. We're moving our stuff out of the apartment and into Branch's parent's garage on Friday and we're staying with my mom for the time being.

*Please note: While I strongly support the legalization of marijuana for multiple reasons, I do not support my home smelling like it.  I'm also certain that if the neighbor is lighting up at 3PM on a Wednesday, it's more than likely to be more than a one-time occurrence.